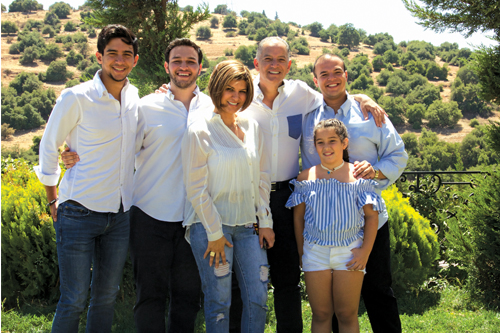 Prescription for Happiness
Text and photos by Noor Nasser
Ten years ago, Dr Amjad ‘Aryan spoke to us about his journey from pharmacy intern to owner of Jordan’s first retail pharmacy chain. We catch up with the father of four and his wife, ‘Oraib, to see whether they’ve all caught the pharmacy bug.

In 2007, we chatted with three boys climbing all over their baba on the sofa, certain they would all grow up to be pharmacists just like their baba and jido. Fast forward 10 years: what are ‘Izzeden, ‘Amr and Yazan up to today?

‘Izzeden (22) has grown fond of the social sciences and humanities, pursuing a degree in Political Science and Philosophy as pre-law from George Washington University. He is taking some time off of university before diving into corporate or contract law, but that doesn’t mean he’s lounging around. After finishing his Bachelor’s degree, ’Izzeden turned a private family farm into an equestrian centre with his father. Beaming with confidence and wit, ’Izzeden, is set on “strengthening and growing equestrian arts in the Middle East.” His father adds, “It’s one of those sports that’s associated with the wealthy. We’re trying
to make it affordable for everybody who loves horseback riding.”

‘Amr (20) is in his third year at Massachusetts College of Pharmacy and Health Sciences (MCPHS), studying Pharmaceutical Business and Management. He says he wanted to go to MCPHS when he was in second grade and it’s the only university he applied to. “There’s a lot of family history that goes into that university,” explains ‘Amr. “I’m the seventh ‘Aryan to go there!” The composed young man interned at Pharmacy One this summer and has become, according to his father, “an expert at sorting out damaged and expired medications.”
Yazan (17) is starting his senior year of high school. With university just a year away, the youngest – but tallest – of the brothers, plans to pursue a degree in business. Working at the Equestrian Centre during Ramadan and seeing how ’Izzeden built it up, inspired him. He is currently the chair of Model United Nations (MUN) at his school, and loves Political Science, just like his eldest brother.

Before
Ten years ago, we met with the tight-knit family sitting on their sofa fighting for a good spot next to baba and mama and inquiring curiously about the sex of their soon-to-arrive sibling. Mama then rubbed her four-month pregnant tummy and smiled,
“I hope this time it’s a girl!”
Now
Naya (9) gets her love for gymnastics from her mother and her love of pharmaceuticals from her father. The self-assured brunette says she wants to become both a gymnastics teacher and a pharmacist! Glancing over at Naya in her husband’s arms, ’Oraib admits her daughter is “learning to be independent in an amazing way, especially now that I’m busier than I was when the boys were growing up.”
Family connections
With a big smile on his face, Amjad describes his children, calling ’Izzeden the modest one that had it the hardest growing up, and ‘Amr the “slick” one. According to his mother, ‘Amr is also very caring. “He called me the other day all worried because I had stayed later than usual at work,” says ’Oraib with a smile.
Yazan was the easiest to raise, says his mother. “He’s the most disciplined one,” she explains. Naya is the most like Yazan, as “they’ll both talk you to death,” laughs Amjad.
But then there’s no such thing as wasta
The couple have passed on to their children a strong
work ethic as well as an unwavering belief in what one can achieve.
When we interviewed ’Oraib in 2007, she had an MA degree in Physical Education from Boston University and was a full time mother. Today, she’s the Director of Front Store Operations at Pharmacy One. But that’s not what impressed us. ’Oraib had to climb her way up, first working as a cashier.
“A lot of family businesses have a hard time surviving second and third generations because kids graduate thinking that they’ll be managing the companies right away,” explains Amajd. “’Oraib set an example for our kids as a cashier working in both East and West Amman and not using her married name.”
There’s no sign of anyone in this family slowing down anytime soon. The 51-year-old pharmacy tycoon, who scored an all time low of 66.5 in tawjihi decades ago, is heading to Harvard University this coming January for a fellowship. His “I can” philosophy, which he stresses to his team at work and his family at home, is the surprising ingredient behind his success. “There is never a moment of doubt or a ‘whether we can do it’ mindset. It is ‘when can we do it’.” This is also reflected in Amjad’s adventurous travels over the past four years, climbing to Everest Base Camp, the North Pole and an Italian volcano and walking El Camino Santiago. “Just challenge Amjad and he’ll do anything,” laughs his wife.

Ultimate success?
Ten years on, the family still strives to find quality
time together. With Amjad’s work days ending at 11pm, he doesn’t often have time for the 4pm family lunch he used to never miss. “Sometimes the pressure gets to you,” he admits.
Even Fridays are now spent at the equestrian centre, but if anything, it has brought the family closer. Amjad exclaims, “Being with the horses, being with the family, it’s beautiful. I love it.”
While it’s clear that the four children are paving their own paths to success, what makes baba most proud is “having kids that kiss me every morning and tell me I love you at the end of every phone call.”
Indeed, Amjad and his family have acquired a distinct prescription for happiness. Love is the best medicine!

To give us your feedback:

To participate in competitions:

ABOUT US
© Copyright 2017 FAMILY FLAVOURS MAGAZINE